Plan by Choice, Not Crisis: One Family’s Consortium Success Story

Craig suffered from complex medical issues. Craig’s parents, already in their mid-70s, wanted to find a good home and someone to care for Craig while they were still in good health. In looking at the available options, however, Craig’s father explained, “We never saw anything that got us excited.”

In 1995, Craig’s family first heard about family consortiums and talked with others who had started one.  Excited about this option, they approached their county board. Although  the board gave a less-than-enthusiastic response,  the county offered a list of other families who might be interested in a consortium.

After a few more years of investigating the possibilities with other families, Craig and his parents finally met two families with sons interested in developing a home with Craig.

The three men and their parents found that they all got along well, and  after a while, they found another, compatible, fourth housemate.

All four men were at the same cognitive level and shared the same type of severe disability.  Although there was an age difference, the fact that two were older and two were younger eliminated any potential “odd-man-out” feelings.

Next, the families rented a house from a nonprofit housing corporation, and each man received Supported Living funds for support services.

Along the way, the families experienced some serious conflicts with their service provider. The families tried to work with their county board to resolve the differences, but finally, the parents decided to discontinue the contract. That meant the Craig and his housemates had to move back in with their parents for a while. Having learned much through the first try, the parents soon found a satisfactory new provider, and their sons moved in together again.

Although these particular families have never incorporated as an official consortium, they meet regularly to make decisions and address problems.  In spite of the difficulties along the way, they have no regrets.  Craig and his housemates say they’ve found a home where they feel safe and comfortable, living with people who have become their friends.

In the process, their parents, too, have formed a circle of support and comfort for each other.

Today, they are happy that they were able to “plan for the future by choice, not in crisis.”

“Plan for the future by choice, do not wait for a crisis”

Planning. We’ve all had to do it for ourselves. But planning the future of a child with a disability is complex. It is much more than making a list and checking off items.

It is an ongoing and emotional process. Some plans will take shape naturally, such as the transition from adolescence to adulthood. Other changes take time and planning.

You may  explore options for a time, then set things aside because you’re not ready, are not making any progress, or just feel you need more time to contemplate what will work best. You may even decide not to plan.

If you want to be proactive in planning for your child’s future, read on.

When to Start Planning — A Road Map 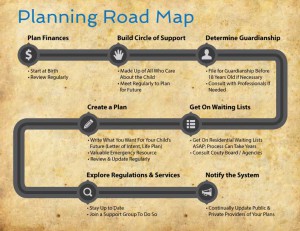 Q: When should planning begin? When a child is born, in high school, when he or she is ready to move out, or when I can no longer care for him or her?

A: The sooner, the better. Unfortunately, there is no step-by-step schedule for productive planning. The process can be slow and tedious, sometimes taking years. Plus, decisions made under pressure often are not the right ones.

However, there are some basic guidelines to ease the process as shown in the Road Map in Figure 1.